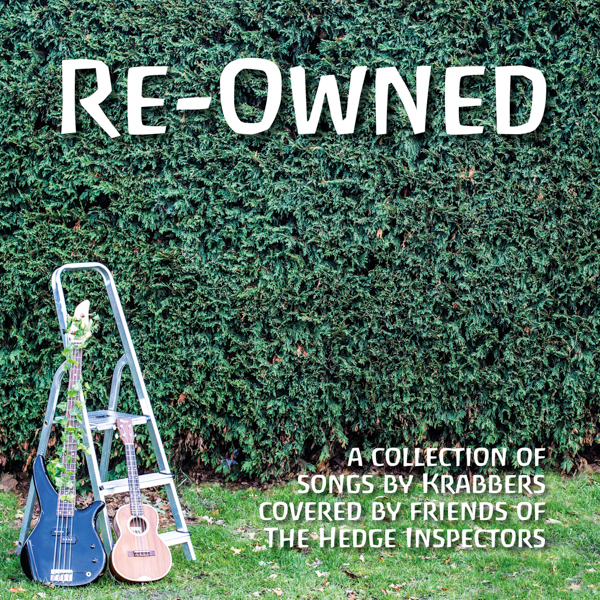 First of all, I think this album should get a 'Cool Cat Ukes Recommended Album Award', but for full disclosure, I was involved with it (mostly in an administrative capacity), so because of the personal connection, it seems pretentious to give the award. But, consider it recommended!

Why? Well, start with songs written by Mike Hayllor (aka Krabbers). Mike has written over fifty songs that are well known in the ukulele world. He's a well respected artist and one half of the immensely popular "Hedge Inspectors", the other half of that duo being his wife, Caroline.

Andrew Daniels (AndyDan) , singer - songwriter and an extraordinary musician has been a long time admirer of Mike's work, and was inspired to recruit other artists to record unique covers of their favourite 'Krabbers' songs. He asked Mike and Caroline to nominate a charity, and they requested that profits from the CD sales would be donated to Macmillan Cancer Support, a service which Caroline found invaluable while undergoing recent treatment. This album is the result, it's entertaining, surprising and just plain excellent, all at the same time.

I'll mention each of the songs in this review, they all have different attributes, this is such a varied album. The best thing is it takes Mike's already brilliant songs, and allows each artist to interpret the song and add their own style - or even bring out something new.

So, from the top:

The album opens with the brilliant Plastic Jeezus, and "Big Storm". Claps of thunder and the sound of rain start the track before the cheery, jaunty style of the band and Simon Fernand's uplifting vocals start us off.

Then, Dead Mans Uke come in with "Ukulele Underground" adding their dum ching style to it. They've even added a vintage violin (as mentioned in the lyric) and harmonica.

Zoë Bestel now with "Peace Of Rock". I challenge anyone to not get misty eyes listening to this. Just perfection, clear vocals and the ethereal backing we've got used to from Zoë. Brilliance.

Tricity Vogue joins forces with Opera-lele, who give us "Stars Will Guide Our Way". Almost like a 007 theme, this is a proper theatrical production, George even gets his trumpet (I'm told it's actually a flugelhorn) out for us. 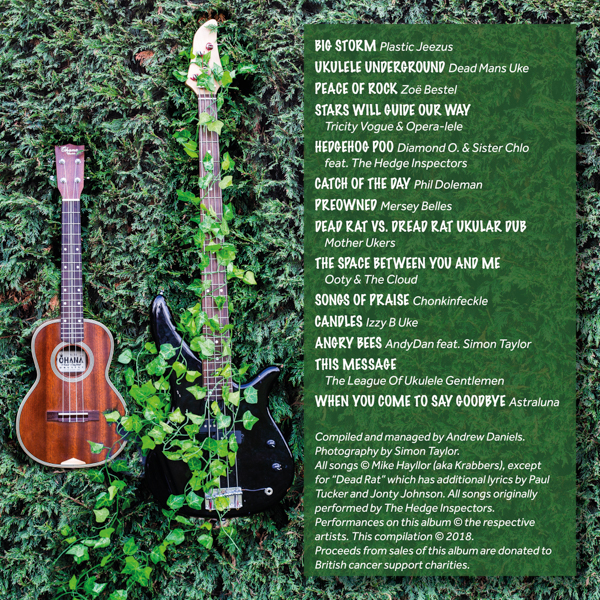 Mike's songs are varied from the serious and thoughtful to the humourous, and we crash back to earth with Diamond O & Sister Chlo (backed by the Hedge Inspectors) with "Hedgehog Poo". This is their debut recording, and at the ages of 10 and 6, this is the cutest thing you'll hear all year. These new stars are Andy's children who are often seen wowing audiences at ukulele festivals. They always sing along with this song in the car, so it had to be done.

Phil Doleman now with "Catch Of The Day". He departs a little from his pre-war genres and surprises us with a upbeat, contemporary style, a cross between drum and bass, pop, swing, even some scratching in the middle. Amazing. Phil, do more of this, we love it!

The Mersey Belles now with "Pre-Owned", with their harmonies and dynamics. Additional instrumentation gives even more depth as the song builds. Fantastic arrangement, I'm sure Liam Capper-Starr has had something to do with this, too.

"Dead Rat" is covered by the Mother Ukers. I don't want to give it away, but there's a brilliant twist to the song. Slightly Ska style.

Ooty & The Cloud now. "The Space Between You & Me". Another of Mike's thoughtful songs, their clarity allows you to hear every word. Dreamy arrangement.

Move "oop North", and Chonkinfeckle with "Songs Of Praise". The accents come think and fast, there's a magic break in the middle with some brilliant echo. It's another example of the care and thought that every artist has given to their interpretations of Mike's songs.

Izzy B Uke with "Candles". The simplest production of the lot, but just so, so, honest. The emotion comes right through. Brilliant, Izzy.

Andydan does "Angry Bees" and someone called "Simon Taylor" jumps in with the Doctor's lines to contrast with the very Welshness of the rest of the song. The song's all synthy and quirky. Can you hear the brand name dropped in?

Big sounds now with the masters of the pedals, The League Of Ukulele Gentlemen and "This Message". It's in their style, big vocals, big uplifiting, hall filling sound.

Astraluna closes with my favourite Krabbers song "When You Come To Say Goodbye". Much like her album I reviewed, she uses minimal instrumentation for maximum effect. That in itself is an art form that Jen has taken to the highest level.

I know that Mike & Caroline are truly humbled and impressed with this, although throughout, Mike's been saying "Don't rush, I'm not dead yet.". What is humbling is that these songs are so good, and they've been interpreted so well, that this album truly stands up on its own as a collection of songs by various artists. Get a copy, it supports charities and you'll enjoy it, too.

Buy it using the link below, it will also be available to buy from The Hedge Inspectors at their gigs, at unplugthewood etc. The album costs £7.50, prices below include postage and packing. CDs ordered by Monday are normally shipped Tuesday, then the next shipment day is Saturday for orders placed by Friday.

You can listen to samples of this album on the brilliant unplugthewood podcast.

Profits from this album will be donated to cancer support charities.