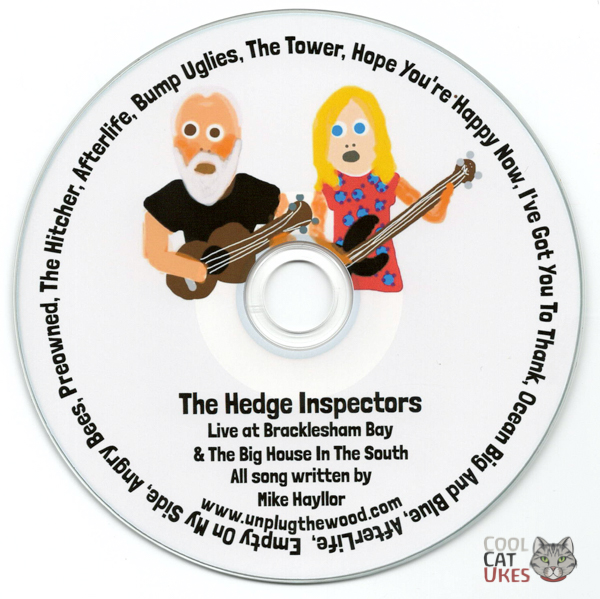 I write with trepidation. Mostly because I'm writing this on a Tuesday, the day that I sit next to the awesome Hedge Inspectors at the unplugthewood jam in Ash Surrey. If you've not been there - why not? The trepidation is because I'm often the sounding board for Mike's jokes and ridicule at my efforts (it's all banter, really - Caroline assures me). If I get anything wrong, I'll know about it!

So, Mike (Krabbers) & Caroline are the duo that make up the Hedge Inspectors. Mike writes the songs, Caroline adds bass and other arrangment bits, so really she should get the credit for that, too.

If you know the Hedge Inspectors, you'll know that their music is a great mixture of thoughtful, fun and even novelty songs. What's on this CD is a mix of those, from sets at two live gigs in 2019 - Bracklesham Bay & Big House In The South. As such, this is truly live, no post production fixes or even mixing. What you are getting is what came out of the PA at those performances. You get the little bits of conversation mid song, chats to the audience and so on, but it's a clean feed from the stage mixer, so it's good quality.

If you already have some of their CDs, there's new music here. Music that's not otherwise committed to CD.

'Empty On My Side' is one, and features the melodica that Mike is sometimes using. Then, the popular 'Angry Bees', a true story* about Mike, a tractor and cheese. See if you can sing along and beat Mike with that long note. 'The Hitcher' is another true story*, but here Mike uses a loop pedal to bring reggae/dub style to the ukulele with great effect. 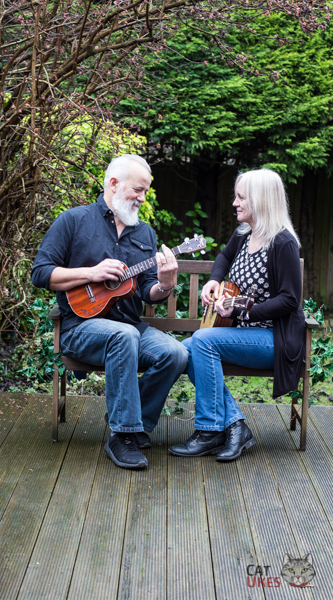 Recently, we've been enjoying sea shanties at unplugthewood, so much that Mike's written his own - 'Ocean Big And Blue' mostly as a way for Mike to introduce sharks and dolphins into a song. He's done it on porpoise. Caroline plays recorder on this, between the pair of them I hate to think how many instuments they play!

As the "Hedge Inspectors Essex Tribute Act" (Mike's words), I can vouch for these songs - many of these I perform at open mics around Rayleigh in Essex, particularly Peggy Sue's in Leigh-On-Sea on a thursday night, and most of the comments I get are about these original songs. Even when I perform them, the songwriting shines through and makes a great impression on the audience.

If you've seen them at a gig, this CD will re-kindle the fun and emotions that they generate. Top stuff!

How to get a CD? It's a secret, but seek out the Hedge Inspectors at a live performance, come to unplugthewood and ask for one. They are special...

The Hedge Inspectors can be found at www.unplugthewood.com. Try and get the CD from there, there's a shop, song sheets, all sorts of stuff.