We've looked at Lava's innovative ukulele (the Lava U) before, but they sent us this press release about their new guitar. While guitars aren't really our thing, this is of note as possibly an indicator of things to come in the ukulele world.

It's new because it's what Lava call a "Smart Guitar". Where other guitars have their pre-amp and some have effects units, this has a touch screen much like a phone in place of the buttons and knobs. This allows for apps to be added and while they mention a tuner effects, it could clearly be capable of a lot more. It already has a recorder / looper built in and some tutorial apps but just imagine... 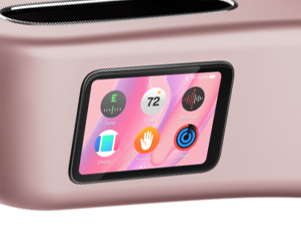 The display on the Lava ME

Thinking of applications like OnSong, lyrics, chords and prompts could be on that display. For musicians playing sets, a timer and set list. With a computer in the guitar, so much is possible, even calling up new effects during a song. Maybe there might even be an API allowing for third party writers to develop new apps?

Another benefit of the Lava system we've already found is that you can ask a sound engineer to leave your line 'clean' and control reverb and effects yourself. If you ask the sound guy for reverb, they often can't resist adjusting effects during a song...

It's marketed as a serious guitar, being of carbon fibre construction, in two sizes and five colours and is available for $999 (UK prices to be confirmed).

We've yet to see what this innovative looking guitar is like in the real world, but it does give some food for thought.

"LAVA MUSIC’s first-ever smart guitar LAVA ME 3 features an intuitive design and is packed with awesome features that are living up to its smart identity.

On LAVA ME 3, usual guitar gear is transformed into independent apps and packed inside its 3.5-inch multi-touch display powered by the company’s original HILAVA operating system.

Guitar players can now make the most of this unibody carbon fiber guitar simply by scrolling its screen. They can tap the Tuner app and tune their guitar to the perfect pitch in a blink, or pick any of the unique effects in the Effects app to produce rich and expressive guitar sound, or create a complete multi-track music by overdubbing the rhythmic grooves from the Loops app and recording it with the built-in Recorder. With everything built in the guitar body, LAVA ME 3 is super intuitive, and even beginners can get started faster using the training app called Practice. Those unique innovations certainly bring a surprising boost to the guitar’s playability and user experience.

For the sound performance, LAVA ME 3 puts together the FreeBoost 2.0 actuator, Honeycomb structure, and the 4-MASS technology in the soundbox. The actuator, set to boost vibrations, works together with the Honeycomb structure that enhances 20% deeper bass and the 4-MASS technology that assures harmonic resonance in and around the soundbox, giving the sound a clear, full, and rich texture from the get-go.

In terms of styling and spec, LAVA ME 3 is 36-inch and 38-inch in size and coated in futuristic finishes ranging from White to Pink, Soft Gold, Blue, Red, and Space Gray. It is a clear representation of LAVA's signature guitar design with the unibody carbon fiber construction, Elixir Nanoweb strings, and the Plek machine leveled HPL fretboard. The lightweight carbon fiber guitar body is tough and shock-resistant, landing it in the league of popular travel guitars.

LAVA ME 3 features a U.S list price starting from USD $999 and is available from LAVA MUSIC official site and local dealers."